Cub Cadet is well known for its line of zero-turn lawn mowers and other outdoor power equipment. And apparently, Ohio-based parent company MTD Corp., believes that the brand should forge a path to becoming a bigger player in the utility vehicle market.

For starters, MTD hired Allen Talley in March as director of the Utility Terrain Vehicle Business at Cub Cadet. By June, Powersports Business had been invited to a media ride aboard the all-new Cub Cadet Challenger 550 and 750 UTV models in the Foot Hills State Forest of Minnesota, located near Spider Lake. 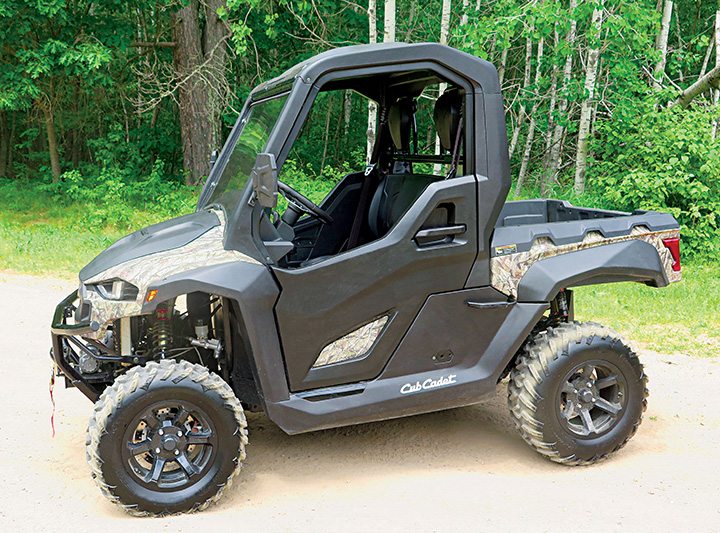 On a 29-mile trail system that offered some rough and rocky spots, in addition to some wet and sandy curves, the new Challenger models proved entirely capable, providing an element of fun lacking in its older workhorse cousin, the Volunteer series.

But as pointed out by Tom Mielke, the brand’s product marketing manager for UTVs, the new machines are equally work-friendly. The customization options are impressive for a vehicle of this type. The 750-class machine brings a $10,999 MSRP, while the 550-class unit retails for $9,999.

Easy-in and easy-out for the driver was noticeable, and comfortable, as we stopped frequently to check out the landscape, and even pondered a dip into Spider Lake itself. Standard high-sided and steel-reinforced doors are indeed impressive and sturdy by design. As a driver, they certainly protected the left leg from any dirt, mud or water. The Cub Cadet Challenger 550 and 750 models provided a capable feel on the trails of Foot Hills State Forest in central Minnesota.

The automotive-style cockpit design features a tilted steering wheel, and both open storage and a closed glove box.

“It’s been designed to be more functional and easy-to-use,” said Mielke, who joined the UTV division in 2015 and brings a powersports background with stops at Mercury Marine, Gibbs Quadski and Erik Buell Racing. “And it can be completely weather-sealed in minutes with the quick addition of upper doors and a rear window.” Mapping out a path on the trail system at Foot Hills State Forest, with a camo Challenger ready for action.

Mielke noted that the machines were built with customization opportunities in mind for the consumer, whether they’re on the farm or ranch or riding off-road.

The 34-by-46-by-11-inch cargo bed includes integrated “T” slots to secure purpose-built accessories. The vertical slots accept standard 3/4-inch plywood for partitions. The bed boasts a 500-pound cargo capacity for hauling everything from firewood, to stone, to the trophies of a hunting or fishing expedition. The pickup-truck style bed latch brings a familiar feel.

“With the doors and the cargo bed, we wanted to make it feel like you’re getting into a small pickup truck,” said Mielke. “And it’s more utilitarian than a truck for a fraction of the price. It’s very easy to rationalize the purchase of this type of product.” The Challenger series is notable for its standard features, including windshield, side mirrors and winch.

What else is there to like about the new Challengers? The air intake is under the hood, with the air filter easily accessible under the seat. Fully adjustable three-way shocks (preload, compression and rebound) make for a comfortable ride. Turn signal hardware and a horn come pre-installed for those headed for the road. LED tail lights and cast aluminum wheels also make the offering attractive.

“We’ve raised the bar on ourselves, and the industry,” Mielke said.

Designed and engineered by Cub Cadet, the Challenger series is manufactured by Hisun Motors Corp. at its factory in Chongqing, China.

Hisun, of course, is known for both its engine making and UTV manufacturing prowess. The Challenger 550 offers a 546cc EFI engine rated at 27.5 hp, while the Challenger 750 features a 35.8 hp, 735cc EFI engine. Both models accelerate to speeds up to 45 mph, towing up to 1,200 pounds and pulling up to 3,500 pounds with the standard winch.