DFK sees growth for 2016 after product reveals at AIMExpo

After kicking off its first year as an AIMExpo exhibitor, DFK Cabs looks forward to year of growth with updated systems and new product development. During the October event in Orlando, DFK debuted separate cabs for the Kawasaki Mule Pro FXT and Yamaha Wolverine, and a new Protector Cab unit.

“It was our first time being there. I was a little apprehensive because of the show being in the South and our product being mostly used in the Midwest and North. But I did find that there was a pretty good representation from the North as far as dealers traveling. We ended up actually expanding our booth at AIMExpo, in fact. We had brought three vehicles with us, and there was space across the aisle, so we picked up another 10-by-20 [square feet].”

The real crowd stopper at AIMExpo was DFK’s latest product under development, the DFKool air conditioning unit, which debuted as a concept model during the event. “Every show that we do, we get calls and people coming up and saying, ‘Do you have an AC system for the cab?’ It has been a common occurrence since we started four years ago in the North American market,” Kelly said. “The reception of [the prototype] was exceptional.”

Creating the industry’s first universal air conditioning unit is no small feat, and Kelly says that the product is still under development, with a target release in the spring of 2016.

“The issue of it all was just the technology involved because not every motor — in fact very few of the UTV motors — are able to handle an air conditioner. I’m not going to put something out that’s not going to work universally on as many vehicles as possible, on any system and conform to the North American electrical platforms.”

There is still a bit of work to be done, but Kelly says that the concept for the DFKool system is on schedule. “We’re really excited about the direction we’re going with this. The concept is strong: To operate the air conditioner on its own power source, so you’re not tied into the engine of the UTV in any way,” he said.

By designing the air conditioning unit to support itself, consumers don’t have to worry about the added stress to their UTV’s engine.

“The beauty is no matter what kind of climate they’re working in, they’re not going to be losing any power off of their engine because of the air conditioning unit,” Kelly added.

With a target price of $3,995, the air conditioning unit’s cost may be steep for the general hunter or UTV consumer, but Kelly says the strongest response has come from the dealers that work with the General Services Administration (GSA) on large contracts or for military use.

Consumers who are in their vehicles every day and working all the time also enjoy the protection of an enclosed cab without sacrificing visibility, he said.

“Our designers have done an incredible job of bringing the visibility needed in a forklift cab to our UTV cab designs,” Kelly said. “When you look at a DFK cab … you see top-to-bottom, side-to-side, front-to-back the best visibility in the industry. Everywhere you look, you’ve got a clear view.”

The see-through cab also is built to withstand any elements. Kelly says that often at shows he demonstrates this strength by issuing the “weed whacker” test. A weed whacker is run against the polycarbonate plastic door to show onlookers that it’s not going to scratch. In 2011, DFK opened its North American distribution center near Chicago. One hope for 2016 is to participate in several industry events, such as AIMExpo again, to gain consumers outside of its usual regions with the option of air-controlled protection and to expand its brand identity in those regions as well. The European company is 20 years old, and it began by making cabs for forklifts and now is applying that heritage into its designs for UTV cabs.

DFK currently has the largest selection of cab kits in the world with more than 50 varieties designed, but Kelly notes not all of them are readily available in North America. “We’re currently working with a selection of about 25 models that are available through distribution or dealer direct,” he said.

This list constantly is growing due to OEM updates and new vehicles. The company uses both internal and external criteria when selecting which new models to design. This year, for example, DFK released hard cabs for both the Kawasaki Teryx and Yamaha Viking VI, the only ones available in the industry. It has also released cabs for brands like Polaris and redesigns for John Deere Gators.

With manufacturing based in Europe, the timeline for getting a cab from design to development can vary. “We’ve developed some incredible relationships with dealers over the years now, and a lot of dealers are very willing to help us out by loaning us a vehicle for a couple days,” Kelly said.

The most intricate part of the design process happens in the measuring stage, which can take up to two days. “We have to be absolutely confident on every touch point, every connection point and weight distribution,” Kelly said. “We do not drill into any part of the cab or the vehicle because we don’t want to compromise the integrity of the rollover protection system. Our design process is quite intense, but it has to be.” 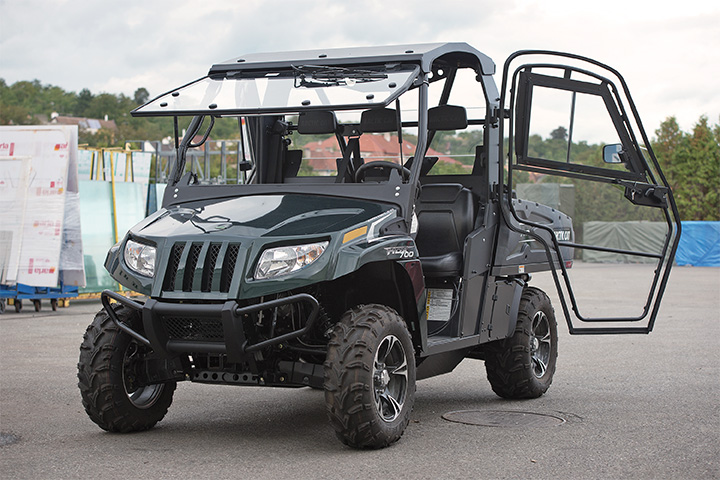 DFK’s cab kit for the Arctic Cat Prowler 700 is one of more than 50 varieties of cabs DFK produces out of Europe.

Once the designers get a vehicle and complete the measurement process, Kelly says they can have a prototype designed in as little as eight weeks. Afterwards, the prototype is approved, sent into production and then shipped to the U.S. “From initially getting the vehicle to having production in my warehouse, the process can be as short as 16 weeks,” he said.

DFK faces competition in the industry, but strives to set itself apart with its use of superior materials, increased visibility and durability.

“We’re producing a high-quality, well-designed cab kit that we build to last as long as the vehicle,” Kelly said. “It’s not just a two- or three-year designed kit.”

New this year, DFK introduced its Protector Cab as its version of an economy cab. It will be priced 35-40 percent cheaper than the premium cab kit.

“We’re in the process of viewing all of our models to see which ones may be best suited for us to add this option to,” Kelly added. The Protector Cab will not have the same visibility or features, but it will still be a fully-enclosed hard cab kit. The lower price point may help make DFK more approachable to the everyday consumer.

In addition to new cabs and lower pricing, DFK aims to make a bigger footprint in the social media world as a way of increasing its North American brand identity. Separating from the European parent company’s page and adding more engaging content are two ways that the company hopes to promote its own individual Facebook page.

“We need to get a stronger North American identity, and the Facebook page is our first step in this direction,” he said. “We need followers — that’s what our passion is right now is to find likes and followers!”

The page, DFK Cab America Inc., features photos and exclusive videos of the DFK products as well as installation tips and availability.

“We’re really excited with what happened at AIMExpo and with what’s going in the marketplace. Now people are starting to recognize us a little bit, and we just need to work toward that,” said Kelly. “We’re not a big team, but we’re working hard every day to try and get things out there, and the best thing is we know that we have the best product in the marketplace.”