When accomplished rally racer and former Dakar Rally participant Jenny Morgan asked Giant Loop co-founder Harold Olaf Cecil who would be a good North American importer for Rally Raid’s new Honda CB500 suite of products, Cecil thought hard about his answer. And then he landed on an obvious solution. 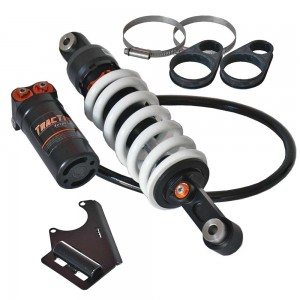 United Kingdom-based Rally Raid Products had developed its first lineup for the CB500 bikes, and the company needed a North American distributor, as the product didn’t align with the U.S. companies it already partners with, such as KTM Twins. Cecil said this new partnership worked perfectly for Giant Loop for a number of reasons, one of which is that Rally Raid already makes luggage racks designed to pair with Giant Loop bags.

Cecil had also seen the kits Rally Raid already makes for the Triumph Tiger and KTM 690 Enduro, so he was familiar with the quality that Rally Raid brought to the table. And the Rally Raid CB500 products were a solid addition to Giant Loop’s new retail store in Bend.

Cecil also liked the idea of importing products for the CB500, which is an adventure bike that fits perfectly within Giant Loop’s “Go Light, Go Fast, Go Far” slogan.

“I think there’s a niche that’s not really being addressed by the market right now by any of the OEM manufacturers. You have the single-cylinder enduro or dual-sport bikes, and then you have the big twin-cylinder adventure touring bikes on the other end of the spectrum, so KTM has the 1190 Adventure, for example, and the BMW GS line. But there’s nobody addressing that middle ground, so it was very appealing to me to offer our core customer, the adventure touring rider what, to me, is the best of both worlds in that respect,” Cecil said about the Honda CB500.

From what he’s learned about the bike, it has a strong motor, long service intervals, a lower seat height and parts that are easy to source and inexpensive nearly anywhere on the planet.

“I think it becomes a very logical option for somebody who’s looking at doing a long-haul around-the-world trip,” Cecil said. Jenny Morgan put the new Rally Raid Products for the Honda CB500 line to the test in a ride that included a trip through Moab, Utah.

Giant Loop will be importing the full suite of Rally Raid’s CB500 aftermarket parts, including an engine guard, brake reservoir protector, shorty aluminum brake and clutch levers and more. Many of the parts not only fit the CB500X, but the CB500F and CB500R as well.

By mid-July, the first four of the Level 3 kits had been delivered to Giant Loop, which in turn had shipped them to customers that had pre-ordered them.

“All the parts are basically in production now,” Cecil said in mid-July. “We’re bringing them in from the U.K., and we’re getting all our ducks in a row to get them up on our website. The response has been pretty enthusiastic right out of the gate.”

Though the Rally Raid Honda CB500 products are just hitting the U.S. now, Rally Raid and Giant Loop have been building up suspense for the product for some time.

Just as Giant Loop did with its initial launch in 2008, both companies went to the well-used Adventure Rider forums (advrider.com) to promote the new Rally Raid parts.

“The Adventure Rider forum has been pretty instrumental in generating interest and excitement around the project,” Cecil reported. “In that forum, there is a vendor thread, and Rally Raid Products has essentially been sharing with that community of enthusiasts the development process for these parts. As they’ve been building parts and have been testing them, they’ve been posting up photos, and the last time I looked, that thread had something like 80 pages, and there was a lot of interest from all over in this project.” Accomplished rally racer and former Dakar Rally participant Jenny Morgan poses for a photo after her 12,000-mile-plus, 50-day ride from Bend, Ore., to the East Coast of the U.S. and back on a Honda CB500X loaded with Rally Raid Products.

Giant Loop also has been posting news about importing the lineup on the Adventure Rider vendor thread, as well as posting on other forums and on social media.

“We’re pretty much building this thing in the grassroots fashion that we’ve always used as our approach here at Giant Loop,” Cecil explained.

Put to the test

As soon as Giant Loop built its first Rally Raid-equipped Honda CB500X, the parts were immediately put to the test. Morgan assisted in the build and then set off on a 12,000-plus-mile, 50-day trip around the U.S.

“She flew over from the U.K. and came to our shop here in Bend and got the very first pre-production sets of parts from Rally Raid. She actually helped us get the bike built, and she jumped on it and took off from there,” Cecil said.

Morgan first rode from Bend, Ore., to Flagstaff, Ariz., for the May 15-17 Overland Expo West, where Giant Loop officially announced that it would be importing Rally Raid’s CB500 parts. Then, she was off for her trip, billed the TransAm 500 Tour.

Morgan rode to Moab, Utah, before heading east. Her trip included a 1,009-mile iron butt day and A-list riding destinations like the Tail of the Dragon as she traveled from the West Coast to the East Coast and back again on the Trans America Trail.

“It just became this fantastic proof of concept. The bike handled flawlessly; no mechanical issues whatsoever. That was a12,000-plus-mile trip, 50 days of continuous riding, and everything went off without a hitch basically. It’s been a really great opportunity to kind of share with the world what this bike is capable of doing,” Cecil said.

Morgan’s CB500X was equipped with Rally Raid’s Level 3 suspension kit, engine guard and brake reservoir guard, along with other additions, including more aggressive tires and other protection parts from other companies.

“This bike got just hammered; that’s the truth of the matter,” Cecil said. “It got dropped multiple times in really rough terrain, and it certainly came back looking like it had been on a 12,000-mile off-road tour — there were a couple dents on the exhaust and a couple dents on the engine guard and so on, but that’s what the engine guard is there for, so it’s getting dented and not the motor damaged, so everything did exactly what it needed to do.”

Morgan also helped build up excitement for the Rally Raid CB500 products, as she turned to the Adventure Rider forum to post photos and news from her trip.

Giant Loop has sold its first shipment of Rally Raid parts directly to consumers, and Cecil reports, that’s how most of the product will be sold.

“Unfortunately, there’s not really enough margin for us to add another layer of distribution very easily,” he said.

However, Giant Loop is willing to work with dealers who think the product could create service revenue or increase their sales of the Honda CB500X.

  Giant Loop recently opened a retail showroom at its Bend, Ore., headquarters, with a complete lineup of its products, as well as other adventure touring accessories.

“I am working on creating a dealer program where we can get dealers a slight discount off of the U.S. retail price because for the dealer, the way that they would make their money is actually on the service side by installing these kits and parts for their customer,” Cecil said. “This kit is creating a lot of excitement around this particular bike, and I think it’s also going to help the dealers, frankly, sell more of these 500X models in particular. So we definitely want to find ways to work with dealers who are interested or have a customer who’s interested. We probably won’t be able to distribute it through our own network of dealers that we distribute the Giant Loop product through.”

In addition to web sales, Giant Loop will also be selling the Rally Raid CB500 products in its new retail showroom in Bend. Because so many Giant Loop fans were already stopping by the company’s headquarters while they were in the area, Cecil decided to open a storefront that allows the company to sell its own product, along with those from Butler Motorcycle Maps, Benchmark Maps, SPOT (GPS), ROK Straps and others in Bend.

“Our vision going forward is to find other companies that are making products that complement what we’re doing, and then in the case of a product like this Rally Raid CB500 addition, it also helps us expand our reach into a slightly different and broader customer base as well,” Cecil said. “So this is absolutely what we’re trying to do going forward.”