James Forsberg was the star of the early June dealership-wide meeting at Riverside Harley-Davidson. After he received a football signed by the entire staff, Forsberg was carried outside into the warm California air by two of his co-workers and drenched in ice water, like football coaches are when they win a big game.

That celebration is just one example of Riverside Harley-Davidson’s dedication to its employees and its customers — as well as its love for celebrations.

Taking care of employees and exceeding customers’ expectations are the priorities for the dealership group. Both are closely monitored using the group’s internal Employee Experience Indicator (EXI) and CXI.

For employees, that means a strong on-boarding process, twice yearly multi-day training from Harley-Davidson trainers for the frontline staff, Joe Verde online training for sales and yearly training for techs. The Motorcycle Group’s core values are commitment, attitude, reliability and excellence, or C.A.R.E., and employees who exemplify those values are recognized at every meeting and huddle. The lunchroom at Riverside Harley-Davidson also offers a bulletin board for employees to praise each other for all the staff to see. 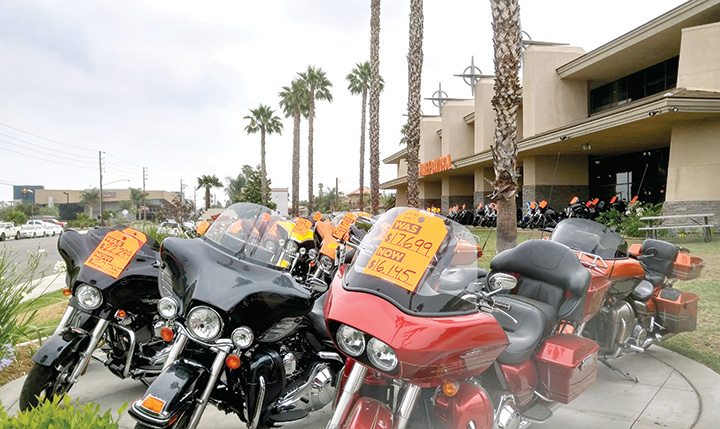 About 10,000-square-feet of showroom space will be added to Riverside Harley-Davidson by extending the dealership to the end of the outdoor overhang when it completes its upcoming expansion.

“The better job that we do with our employees, the better job they do with the customers, and it’s just a cycle,” Mike Veracka told Powersports Business during a visit to the dealership.

“It’s just a good thing when everybody cares, and it starts with taking care of the employees,” added general manager Tambi Lowstan.

Kunzman, who was employed by the dealership before the Verackas acquired it on Oct. 31, 2013, said the commitment to the employees comes from the top down. The Verackas combine for nearly 50 years of motorcycle dealership experience, and they continue to work hands-on with the staff at their various stores.

“They’ve been there, done that,” Kunzman said. “They’re not guessing. They’re not telling you something they haven’t tried. It’s great to have leadership that’s in the trenches.”

Each member of the Veracka family is willing to step in and help any crewmember at any time, she said. When events are particularly busy, for example, it’s not unusual to catch Mike or Paul Veracka stationed behind a cash register, making sure customers are helped in a timely fashion.

Because of the way The Motorcycle Company treats its employees, those employees are driven to offer superior customer service. In fact, the stores are all competitive about their NPS and CXI scores, with all locations’ scores posted at each dealership for employees to see.

The goal is to deliver a premium customer experience, Mike Veracka said. “If we do a good job with the customer, they’ll continue to come back. Obviously with Harley-Davidson, it’s one big family, and everyone’s a part of it, but we make sure we do a good job.”

The Motorcycle Company operates on the belief that sales sells the first bike, but parts, service and MotorClothes sell subsequent motorcycles. The showroom of Riverside Harley-Davidson in California is striking, with about 100 bikes in the showroom at all times.

While buyers wrap up their paperwork, they’re asked about their favorite song. When they exit the F&I office, the song is blaring throughout the dealership, and all employees who are available line up between the bell and the door. Customers then ring the bell and make their way down the line of employees, gaining handshakes and high-fives along the way.

“When you buy a Harley-Davidson, it’s probably one of the top three things ever to happen in your life — you get married, buy a house and buy a Harley — so it’s definitely a big celebration. We want to make sure it feels that way to the customer, and I think they really enjoy it,” Paul Veracka said. “You see the smiles on their face, and every employee comes up and congratulates them on their new bike, and it’s just a great celebration and a great time. And it just kind of cements that experience that, hey, this is the final thing; they signed all the paperwork, and they’re ready to ride off on the new bike with that ceremonial bell ringing.”

Some people cry, while others dance, and all smile. Even though the staff members have to drop what they’re doing and might have to attend 10 or more bell ceremonies in one day, they never get old, Paul Veracka said.

“Once you see the smile on their face, it’s pretty easy to go up there and shake their hand and congratulate them,” he said.

While the Bell Ceremony is reserved for bike buyers, all Riverside Harley-Davidson fans are constantly treated to events. The dealership hosts more than 100 events each year, averaging about two per week. Events are slated far in advance, as part of a marketing plan that’s scheduled more than six months forward.

Events include H-D 101 programs, garage parties and open houses, along with bike nights every other week.

“We try to interact with our customers at all different levels,” Kunzman said.

Some weeks will include a bike night with drinking and music on Thursday, a traditional open house party on Saturday and a family day Sunday.

“There’s something throughout the entire weekend, when we have an event, for every walk of life, whether they want to listen to music or bring the kids out to play in the bounce house and have their face painted,” Mike Veracka said.

The goal at all times is to “keep it classy, not trashy,” Kunzman added. Events like ice cream socials are purposely designed to attract families, and the dealership often runs kids corners during open houses, complete with childcare, so parents can shop without worrying about their little ones.

A recent hit is a tattoo night each dealership in the group hosts on every Friday the 13th. Customers are invited to the dealership, and $20 tattoos are offered. The first tattoo night brought more than 40 participants to Riverside Harley-Davidson, so Kunzman invited even more tattoo artists for the second event, and the line was still long.

Each event is designed to bring people into the dealership over and over again.

“We do a lot of events and customer experiences like that. It gives them a reason to want to come back to the dealership and get on their bike more and ride,” Mike Veracka said.

“The whole premise of the events is it’s part of our customer experience,” added Glen Espinoza, director of operations for The Motorcycle Group.

In addition to the events hosted at the dealership, Riverside Harley-Davidson also sponsors the annual West Coast Thunder Memorial Day Ride, which raises money for the Riverside National Cemetery Support Committee. West Coast Thunder and Riverside Harley-Davidson have raised $630,000 over the past 17 years. This past May, a record 4,300 paid participants joined the ride, and police reported 7,000 bikes were in the parade.

This dedication to customer service has earned Riverside Harley-Davidson an honor held by no other dealership in the world — No. 1 in volume in new vehicle sales. And its sales are still growing.

The dealership has a massive inventory, with about 100 bikes in the showroom and another 600 at an off-site warehouse. Trips are made daily to replenish any sold bikes, and a warehouse system carefully keeps track of each bike, so a White Dyna Street Bob, for example, can be found quickly whenever needed.

Though the showroom, located Riverside Harley-Davidson’s the 35,000-square-foot facility, is already impressive, it’s growing. After the Veracka family finalizes on the purchase of the building, the owners plan to expand the dealership by 10,000 square feet by bringing the front of the store even with a current overhang that faces State Route 91. After the building sale is closed, and Riverside Harley-Davidson receives the necessary approval from the Harley-Davidson Retail Environment Group, construction is expected to start in the fall.

While the showroom is undergoing a makeover, the warehouse is also moving. Though the current warehouse is only 5 miles from the dealership, with local traffic, a round trip can take 20 minutes. A parcel of land behind the dealership is being purchase to construct a new 20,000-square-foot warehouse that can house more than 650 bikes.