Home > Archives > The Hyundai of Powersports

The Hyundai of Powersports

With a roster of five brands selling dirt bikes, ATVs, UTVs, street bikes, scooters and generators, Edmonton-based Visionary Motorsports is taking the long view by betting that its low-price brands have the staying power to become the Hyundai of Canadian powersports — a brand that just 20 years ago sold products based solely on price, but today rivals the finest products from any mainstream global auto company.

Incorporated in 2005, Visionary was started by a handful of enthusiasts who recall the days when Honda and Yamaha, among other Japanese manufacturers, were derided by consumers and dealers alike for low quality, atypical designs and foreign roots.

Today, with the interconnected world economy upending regional status quos with surprising speed and frequency, more consumers are becoming comfortable with the idea that the developing countries enter the global stage as low-cost manufacturers, but gradually evolve into more service- and research-based economies capable of building more sophisticated products. China, Visionary’s team believes, is on that cusp, morphing from just a hub of low-cost manufacturing to something more advanced, hopefully with the long-term staying power demonstrated by the best Japanese OEMs.

Its portfolio of brands — Pitster Pro, Linhai, Cleveland Cyclewerks, Kipor and Hisun, the company’s main focus — was chosen with an eye on the long-term future, the amount of research and development happening behind the scenes and other factors that offer security to the dealerships that sign up with Visionary. The analogy of Korean-based Hyundai is easy to make to help convince consumers and dealers that are considering taking on the Visionary brands, which are designed to offer dealerships higher margins than what’s possible from other powersports products on the market.

“Whether it’s socks or TVs, pretty much any industry that China chooses to compete in, they end up dominating,” said Neil Vanderkooi, director of business development and one of the company’s founding owners. “They might have some copies or do things that aren’t respected, but typically they’ll evolve from that and get to the point where they have their own technologies, designs and, like in Hisun’s case, they invest in assembly facilities in the U.S. and start to diversify like any global corporation.”

At present, Vanderkooi compares the company, specifically its Hisun UTV models, to CFMOTO, which entered North America selling purely on price, but has evolved to a point where overall value and features are capturing customers that don’t want, or can’t afford, the best-known nameplates on the market.

With a staff of 25, 190 dealers and goals of reaching 400 Canadian Hisun dealers in the near future, Visionary is growing at an aggressive rate, posting 300 percent revenue growth last year with similar expectations for the current year. 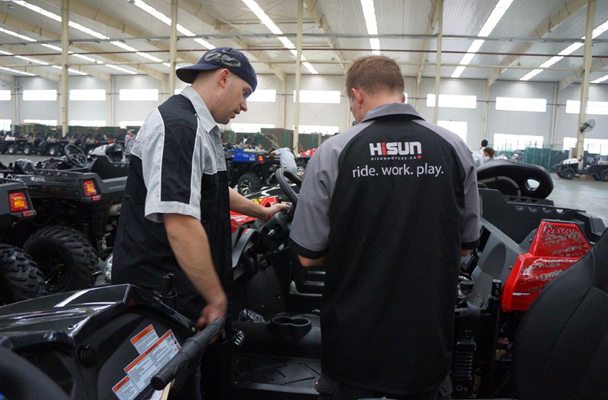 Over the long run, it plans to become a $200 to $300 million operation in five to 10 years — no small hurdle to clear. Vanderkooi said the company receives five to 10 dealer inquiries every week, and always has staff on the road seeking out the next dealership. With proven success in rural areas, its ideal targets are small population centers, and existing powersports or RV dealerships that have the ability to service products after they’re sold, a key requirement for prospective dealers.

With dealers that are considering adding one or several Visionary brands, the company prefers to meet in person and allow prospects to take the vehicles for the weekend, get them out on the street or trail and evaluate them first hand.

“Our retail prices are extremely competitive, our dealer margins are better than anyone on the market that competes in this category,” Vanderkooi said. “We have the support, we have everything they need to be successful, so usually the only real barrier they have is they want to make sure the quality is there — and there’s no better way to see that than to take them out and go through the mud, go through the trails and do what they would do with them.”

While its plans are ambitious, and backed up by plenty of historical examples of rising industry players, there are several obstacles standing in the way of its desired success. At the top of the list is the lasting stigma that follows made-in-China products. From the company’s perspective, that reputation has started to shift in the last few years as China’s economy becomes more sophisticated and consumers become used to many familiar products, like Apple’s iPhone, that hail from Chinese factories. All of its products are currently manufactured in China, although Hisun assembles units sold in the United States at an American facility that has a dynamometer and other high-end testing equipment to ensure quality. It is currently considering adding a similar assembly facility in Canada.

More importantly, significant investment in new products and unique designs will be announced by the end of the year, including a 1,000cc V-twin engine, which is a key component as Hisun seeks to meet the performance offered by top-tier brands in large-displacement categories.

“There’s a ton of product in development for all of [the brands], they’re all investing in new manufacturing facilities, new technologies, partnering with the people they need,” Vanderkooi said. “They’re starting to make the connections they need to really take the product and their brands to the next level, and that’s key for us.”