Dealers described the trip as “once in a lifetime.” And when the dealer meeting commenced, showcasing new models for 2017 at the company’s headquarters in Hangzhou, China, those same dealers were awe-struck at the “legitimacy” of the event: an audio and visual presentation that ranked up with any OEM presentation they had ever seen; cultural entertainment that caused many dealers’ phone batteries to run low due to the extensive video recordings; and, most important, the new models and pricing — those all combined to bring good cheer galore from a world away from home. 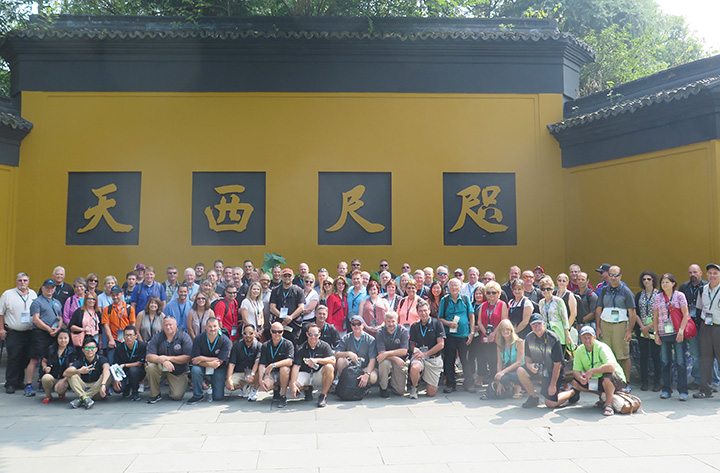 First stop on the tour of Hangzhou, CFMOTO’s hometown, was the Lingyin Temple, a Buddhist temple that is known for its grottos and rock carvings. The writing on the yellow wall translates roughly into “Western Paradise Within Reach.”

Yes, it’s safe to say that the 2017 CFMOTO Dealer Meeting was a supreme mix of business and pleasure, and the industry’s leading independent voice had a front-row seat for the journey as the lone media invitee.

Charles Ni, chief sales officer, shared some important data with dealers. CFMOTO has been the No. 1 supplier of ATVs in China for the past five years, in addition to being the leading manufacturer of large-displacement motorcycles in China. More than 15 percent of the company’s employees are staffed in the research and development department. In fact, CFMOTO’s commitment to R&D since 2012 has grown by more than 189 percent. Dealers also learned that U.S. sales growth doubled in 2015. Dealers were treated to a tour of the massive factory, recently enhanced with intelligent manufacturing technology that has improved efficiencies in the 800-employee factory, which includes plants for motorcycle, ORV, engine, machining, painting and framing.

The meeting’s theme of “Experience More Together: Growth and Partnership” greeted attendees at the Shanghai airport, with three charter buses wrapped with the slogan. When they arrived at the hotel in Hangzhou, a banner with the saying was draped down three stories outside the hotel. And it was the focal point of the dealer meeting presentation itself.

As the adventurer tourer Marco Polo proclaimed upon visiting CFMOTO’s hometown of Hangzhou some 600 years ago, the “Paradise City” is indeed worth exploring. From a cruise on West Lake to visiting the Lingyin Temple and then the Leifing Pagoda, the photo ops were endless.

But it wasn’t all tourist hats and cameras. During the business meeting, dealers were pleased to learn about a newly inked retail financing partnership with Synchrony Financial, as well as an offer from Northpoint Commercial Finance for 30 days of free flooring on 2017 models.

Needless to say the, the ZForce 1000 EPS sport side-by-side stole the show, with its $13,999 MSRP. It’s a pumped up version of the ZForce 800 power plant, and offers CVTech clutching instead of a wet clutch. The ZForce 1000 boasts a 77 horsepower engine, and perhaps more importantly, 82 foot-pounds of torque. It comes with 14-inch aluminum alloy wheels and 27-inch mud tires. New seats provide better gripping and stitching. The unit also provides easier access to the oil dipstick for service and maintenance. The 2017 CFMOTO CForce 500 S EPS and its $5,199 MSRP had U.S. dealers checking out the new model during the dealer meeting in Hangzhou, China.

Another hit among the dealers was the all-new CForce 500 S EPS ATV. Built on the CForce 400 chassis, it provides additional power with the 500 H.O. motor. It comes standard with a 2,500-pound winch and 12-inch aluminum alloy wheels and is only offered in an EPS version. Its $5,199 MSRP also sat well with dealers.

Here’s a look at the 2017 CFMOTO models with MSRPs. Following the dealer meeting, the 2015 Pioneer Club members were treated to three days in Beijing, with stops at Tiananmen Square, the Forbidden City, the Great Wall and the Olympic Stadium village, among other locations.