Majority below or on plan, hopeful for 2016

The Powersports Business/RBC Capital Markets Q1 survey revealed that dealers are experiencing a slow start to 2016 — but improved customer traffic and buying interest are giving those same dealers hope for a successful 2016.

Of the 120 dealers surveyed in 48 U.S. states and Canada, 41 percent reported their Q1 performance was below plan, while 37 percent were on plan. Only 22 percent of the dealers surveyed were above plan for in Q1. 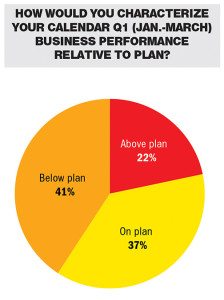 Steve St. John, owner of Dreyer South Powersports, a multi-line dealership in Whiteland, Ind., found that weather played a large role in his dealership’s success in Q1. “In our area one big reason for our success is that we’ve had fantastic weather. The whole winter and spring has been good to us. We don’t sell snowmobiles, so that was great for us.” St. John also hired a new sales manager in the fall who has improved the sales department.

While mild weather was helpful for some dealers in the country, some states like Washington experienced a wet season. Vicki Gray, owner of South Bound Honda in Lakewood, Wash., said weather dampened sales a bit in Q1.

“Weather this year is extremely wet. Last year, when we set our goals, was an exceptional year because the weather up here in the Northwest was so dry. This year was the total opposite, so that made us really push our Polaris product.” Gray found that customer traffic was similar to the previous year: “It’s actually about the same. Our door swings are within 100 [from the first three months of 2015 and 2016].” Between South Bound Honda and its sister store South Sound Honda, Gray says that one location has an off-road focus, while the other is more street-oriented.

“Interest has been there; there’ve been people pulling the trigger, but it’s a little bit slower than normal because of the weather,” she said. “We have Polaris now as a new product, and we haven’t had it in the springtime before, so it’s a new product that’s really pushing all this new interest.”

Steve Littlefield, owner of Central Texas Powersports in Georgetown, Texas, said buying interest in street bikes had increased dramatically at his dealership, which helped his dealership stay on plan for Q1.

“It’s kind of been surprising. Our street-legal motorcycles are up — they were up about 40 percent. I believe there has been definite interest in the street-legal bikes. Our UTV sales are pretty much flat,” Littlefield said. The dealership has also seen an upswing in PWC sales this quarter. “Here in Texas all the lakes have filled up, so that’s been a big positive. I expect to have a good PWC season,” he added.

Inventory levels have posed a concern in Q1 for some dealers after several OEMs decided to release all product in March instead of over the span of March, April and May. “Honda had a program this year where they wanted all of their dealers to take their inventory before the end of March. We’ve got most of the inventory that we’re going to do for the entire summer now in March,” Gray said.

Littlefield also received large shipments of inventory all at once. “Several of the OEMs have done that this year. It’s not that we ordered more product; it’s that we got it all in March. It’s made it a real difficult storage problem, which makes it difficult for me to order on the next order period because we don’t have anywhere to put it.” So while the inventory problem is not an issue of how much, Littlefield said the issue is more the timing, especially considering the amount of inventory he received in just one month.

South Sound Honda added Polaris in July  2015 and since then has made strides to keep up with inventory levels and turns. “On average, we have what we expect to sell through the end of the summer, which would be August for us, at one location. At the other location
I would say that we’re a little under inventory because we’ve rotated our Polaris inventory already this month alone,” said Gray.

Despite weather and inventory level concerns, 71 percent of dealers surveyed answered that their business outlook was the same or somewhat better than six months ago. “I’m looking forward to a good year; I really am,” Littlefield said. “We’ll work around our inventory problems.”