Indian Motorcycle, America’s first motorcycle company, is proud to present the “Frontier 111” crafted by Azzkikr Custom Baggers of Phoenix, Ariz., as a radical interpretation of the new Indian Springfield motorcycle.

The first custom to be built based on the 2016 Indian Springfield, Azzkikr’s Frontier 111 showcases builder Len Edmondson’s exceptional talents for creating award-winning and fully functional artwork. With this bike, his acute attention to detail and outrageous craftsmanship offer a truly show-stopping example of a thoroughly modern retro bagger that features classic lines via contemporary, artistic flare. “We have been working on the cutting edge of the custom bagger movement for years now, but it’s not often that you get to reveal a custom based on a motorcycle the factory just introduced,” says Azzkikr’s Len Edmondson. “From Day #1, we wanted something that reflected the big front wheel trend but still spoke to the heritage and style that is uniquely Indian.” The sleek Frontier 111 incorporates a sweeping line from its hand-built headlight housing to the tip of its expertly crafted rear fender. The front clip includes a custom-made triple tree sourced from KewlMetal, a springer-type suspension utilizing a leaf-spring, a 26-inch spoked wheel wrapped in Metzeler rubber, and a hand-formed aluminum hub hiding a modern disc brake system. Up top the Springfield’s fuel tank was modified for a vintage look and topped with a polished dash piece featuring stock gauges, and a hand-tooled leather seat diverts the eye to the back of the bike, where you’ll find hand-formed side panels, bags and rear fender. The removable bags are fully functional with a mechanical lid, and there’s a vintage-look taillight assembly with brake light and indicators. Hidden by the bags, the stock-size 16-inch rear wheel is spoked while rear air-suspension allows the bike to ride at factory height or drop low for show. As with everything else, the striking red and black paint palette with gold leaf detailing also was done in-house. “Everything on the bike aside from the triple tree was hand-made or manufactured in our shop to an OEM quality standard to fit on the Springfield’s stock frame, so nothing on it makes any actual changes to the engineering of the present bike,” Edmondson says. “In other words, if I wanted to send parts to someone to reproduce this bike with a new Springfield, they could put it together using the same bolt patterns. That makes this build truly revolutionary.” 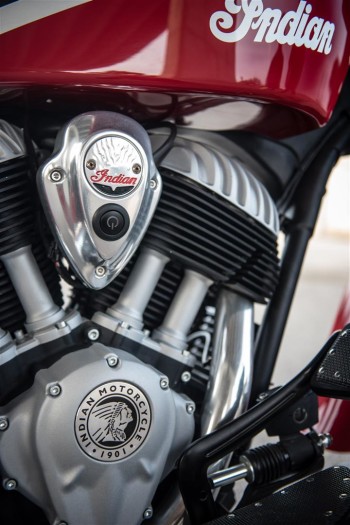 “The Indian Springfield is a touring bike that is meant to be ridden, and by building an extreme custom around the stock frame the Frontier 111 stays true to the spirit of the motorcycle,” commented Reid Wilson, Marketing Director for Indian Motorcycle. “Len and his team did an amazing job with this build and it was very exciting to unveil this bike at the 75th Anniversary of Daytona Bike Week.”