Here are the bikes as described by Triumph

Triumph's Daytona 675 shook up supersport convention with its three-cylinder, 675cc format when it first appeared in 2006, then it did the same to the established order by setting new class performance standards. Ever since its debut the Daytona has consistently topped comparison tests, won awards around the world and even trounced high-specification superbikes in the prestigious international Masterbikes shootout, winning this toughest and most comprehensive test of all sports bikes two years in a row. Race versions have taken titles around the world and six years later it's still a winner on the track. Yet it's the Daytona's razor-sharp style and growling, muscle-packed character which has appealed just as much to its dedicated owners.

Now for 2013 Triumph has unleashed an all-new Daytona 675 and Daytona 675R, with a brand-new engine, new frame, fresh and sophisticated new bodywork and a host of other changes built on everything Triumph has learned from the enormously successful outgoing model. A few tweaks and modifications would have kept the 675 on the pace, but the 2013 Daytona is set to raise the bar once again.

The result is a bike which is 3 pounds lighter than the old model, with more power, an extended rev range, greater precision, feel and agility. It's faster on the track, better on the road and even more satisfying to own.

The heart of the new Daytona is its new engine, which brings more performance and a subtly new character, too. The key change is the wider bore and shorter stroke dimensions, allowing a higher 14,400rpm rev limit to gain more power and a broader spread of usable revs. Facilitating this is the new block, separate from the upper crankcase and with ceramic-coated aluminum bores so it can be made stronger to cope with the higher pressures. Power is up 2bhp to 126bhp, peaking earlier at 12,600rpm and revving on for longer. The torque maximum is 2ft.lbs. higher at 55.3lb.ft, with an increase across the rev range.

On the intake side are new twin injectors per cylinder, aiding the power and torque gains as well as improving fueling accuracy and efficiency. For the first time, titanium valves are fitted, helping the engine achieve higher revs and allowing Triumph's engineers room to reshape them to improve gas flow. This has been so effective there has been no need to increase the valve diameter, despite the wider bore. It's further helped by the new larger section intake, which flows air straight into the center of the bike, right through the headstock, and as a major bonus this increases the quality and volume of the signature three-cylinder snarling intake roar for the rider.

The exhaust system is a clear change as the compact and purposeful new unit now sits beneath the engine rather than beneath the rear seat. This is a consequence of the mission by Triumph's engineers to centralize the bike's mass as much as possible and move the weight forward, key factors in making the new Daytona even more agile and yet more stable at speed.

The transmission features a new slip-assist clutch to provide a lighter lever action and help prevent rear wheel hop under heavy braking. This is aided by the engine management which opens the throttle butterflies to reduce engine braking.

As well as incorporating the new, innovative intake duct, the frame uses fewer sections in its construction for a cleaner, stronger design and has sharper geometry and a shorter wheelbase to make full use of the revised mass distribution. The rear subframe, constructed from high pressure die cast aluminium, not only looks fantastic but contributes to the slim, sharp design at the rear of the bike.

The ergonomics are altered slightly, with a 10mm reduction in seat height and a little less weight placed on the wrists, but the riding position is still designed for the best control at high speed and on the track.

The new bodywork has a sharper, leaner look that also reflects the higher quality of the new bike. Features such as the deliberately split upper fairing add an air of class, while the attention to detail has moved to a new level and includes a highly attractive upper yoke, machined engine mounting bolts, plugged swingarm mounting plate, a revised cockpit area and quickly detachable number plate/tail-light unit for easy track day conversion.

New lightweight wheels provide lower inertia, which assists the speed of turn and the speed of acceleration. It all adds up to a more involved ride.

For added security, an electronic immobilizer is included as standard.

Once again the R version of the Daytona adds the very highest specification components to increase its performance focus, as well as sporting a unique look. 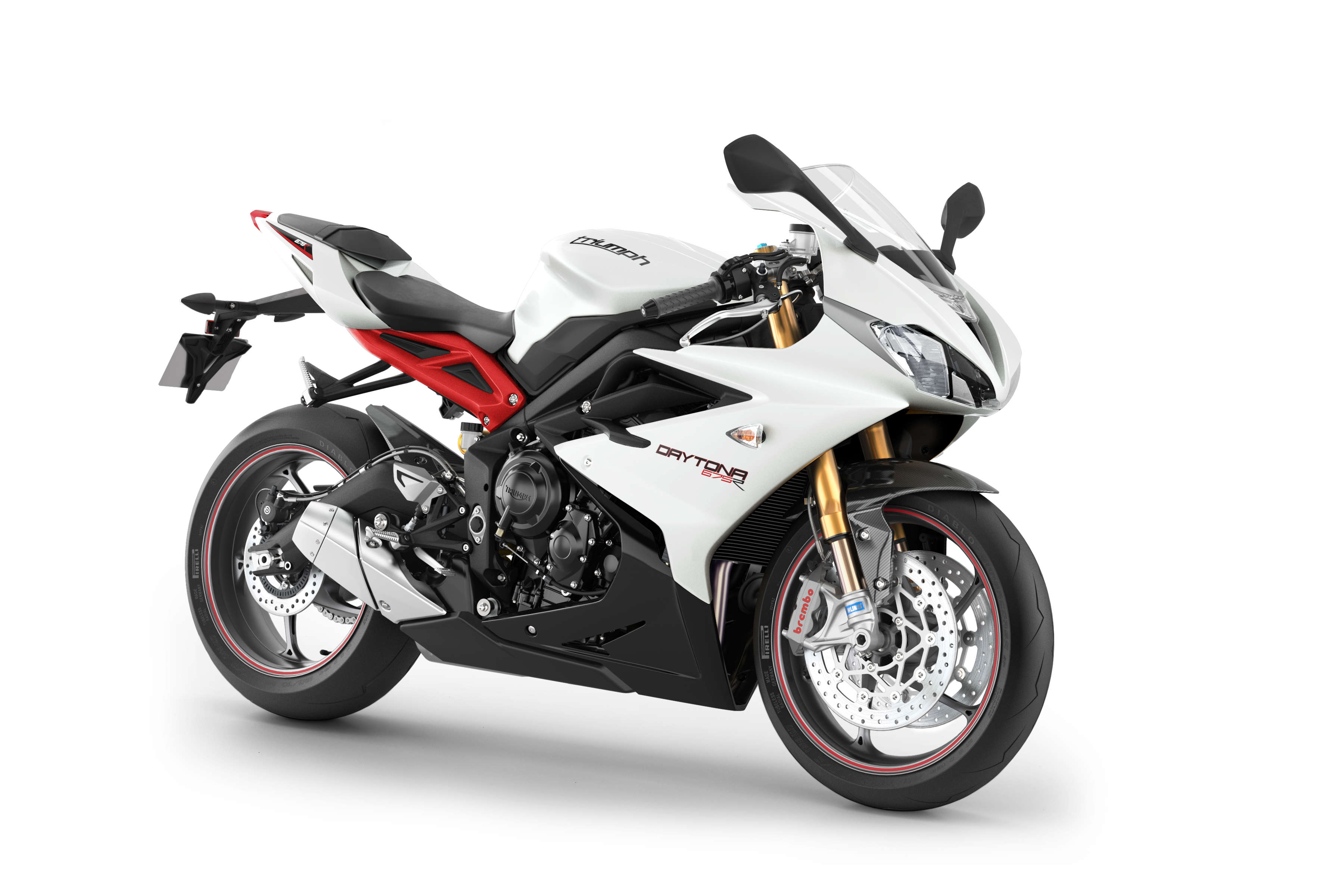 Öhlins suspension is fitted, including a TTX rear shock and NIX30 inverted forks, providing the R with a wider range of adjustability, improved response and a firmer base set up.

The R comes standard with a quick-shift gear change, improved with new software for 2013.

Stunning carbon fiber cockpit infill panels replace the stock ones, further improving the view from the seat, and a carbon fiber rear hugger is also fitted. Cosmetic changes include a red rear subframe and detailing such as the red wheel pinstripes.

A wide range of factory accessories are available for the Daytona 675 and Daytona 675R, each designed to enhance both the style and the function of the bikes. The carefully-designed engine, swingarm and frame protectors improve the looks as well as reducing component vulnerability. There's also a selection of CNC-machined components including brake levers and reservoirs, colored dipsticks and oil filler caps. An approved Arrows silencer is available along with alarms, light luggage and LED indicators. The quick-shift can be added as an option to the stock Daytona 675.

As with all new Triumph motorcycles, the Daytona 675 and Daytona 675R come with an unlimited mileage, two-year factory warranty.