With Cristiano Silei guiding the North American division as CEO, Ducati continues to make impressive inroads in its largest market. Ducati North America’s 21 percent growth in 2012 came after a 2011 performance that saw 43 percent growth compared to 2010. With Silei at the helm of North American operations since 2011, Ducati continues to gain market share thanks to the Italian company’s production of groundbreaking bikes like the 1199 Panigale and the Diavel. In addition to U.S. growth in 2012, Canada (25 percent) and Mexico (7 percent) also gained Ducatisti en masse. To top it off, Ducati apparel and accessory sales rose 42 percent in North America in 2012.

Add it all up, and it points to Silei securing a spot among the 2013 Powersports Business Industry Leaders.

What is the biggest opportunity for the industry, and how can the industry take advantage of it? Ducati’s North American sales have been record-breaking since the appointment of Cristiano Silei in 2011.

Motorcycles are now perceived by the general public as something cool and trendy. They have finally become an option for everybody, not just for a selected few. Bikes are easily seen in the hands of trendsetters such as movie stars, TV celebrities, singers and musicians. In movies they are used by heroes of all ages, especially by younger generations. With the right products and brands, the industry can attract a much broader and younger audience and fuel future growth.

What has been the biggest challenge in your current position and how have you dealt with it?

Making our brand and products more accessible to our customers, within a reasonable proximity range from where they live, is our main challenge. In these past few years we have invested greatly in supporting our dealer partners to create the right environment for our customers to experience what the Ducati brand is all about. The development of our dealer network will remain our focus in the future.

What is the best advice that you can give others in the industry?

At Ducati we believe that it is all about passion, the magnet that attracts lifetime customers, top-notch team members and dedicated dealers, and binds them together in tough times and in times of phenomenal success. My advice is to remember that we are not in the transportation industry. We are creating dreams on wheels and our dealers are an integral part of making the excitement and the passion real and accessible to our customers. 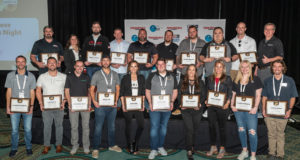